Turning off the Tape Recorder 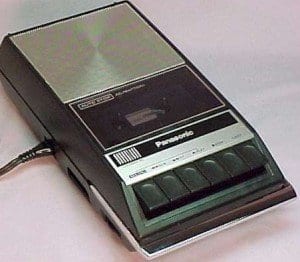 Turning off the tape recorder

Ok, I lied. This post is not going to be about what I saw in the photo from my previous post. But don’t worry; I will get to that at some point. However, I just got back from one of my yoga classes and the focus of the class was one that really struck a chord for me.

Every week we focus on a certain chakra and what those chakras control and maintain. This week was about the chakra that controls stubbornness, your will, and your intellect- the Manipura Chakra.

Now, if you know me at all you know that I am very much a Capricorn and this makes me extremely stubborn. Yeah, I admit it. I can be very pigheaded and pretty much always want to believe I’m right. But, sometimes my stubbornness works in my favor- so it’s a good balance. But, what a lot of people don’t know about me is that I am also insanely hard on myself. I have a constant tape recorder going through my head that pretty much tells me I fail at life. Obviously this isn’t true- in fact based on facts alone I’m pretty damn successful. However, this tape recorder jades my view of this. During everyone’s favorite part of yoga (the part where you take a 10 minute cat nap) our instructor guided us through a mantra or meditation type thing. She stated that the only thing holding us back from being the new us and being successful is that stupid little tape recorder. Granted she stated it a bit more eloquently, but you get the point.

This really resonated with me and was kind of a wake up kick to my head. I know that I’ve been told a million times to not listen to the negative thoughts that go through my head on an hourly basis- but I’ve never really felt the push to really work on this idea. I mentioned in a previous post that I saw a therapist (yup- going back to this now). Well, she is one of the biggest advocates for turning off the tape recorder. Until I started seeing her I always half-heartedly followed the advice. But, with her I’ve actually tried (yeah she’s that awesome). Well, I felt and thought that I had tried anyways.

Now that I’m sitting here mulling over the words my yoga instructor stated tonight I realized that this isn’t necessarily true. I did try and truly thought I was making an effort- but, I was still letting my tape recorder control just how much effort I put in and what seemed like enough. This stuff isn’t easy ya know? I realize now that it’s never going to be easy to just brush off the thoughts and negative feelings, but I can’t put half the effort in and expect extraordinary results. I think I have also finally realized that it’s not going to be “all in a day’s work” and that it’s going to take time and a lot of practice.

I’ll probably mess up a few times and I’ll probably grow quite a bit more too. But, I guess that’s kind of the point of everything in life right? My challenge to you this week is to turn (or try to turn) off the tape recorder- even if only for a minute. Take those 60 seconds and realize just how epically amazing and awesome and unique and powerful you are.

For more: http://amkantrovich.wordpress.com/2013/08/22/turning-off-the-tape-recorder/
Andrea has been a student at SSYS since we opened in 2009.

Leave Us a Review